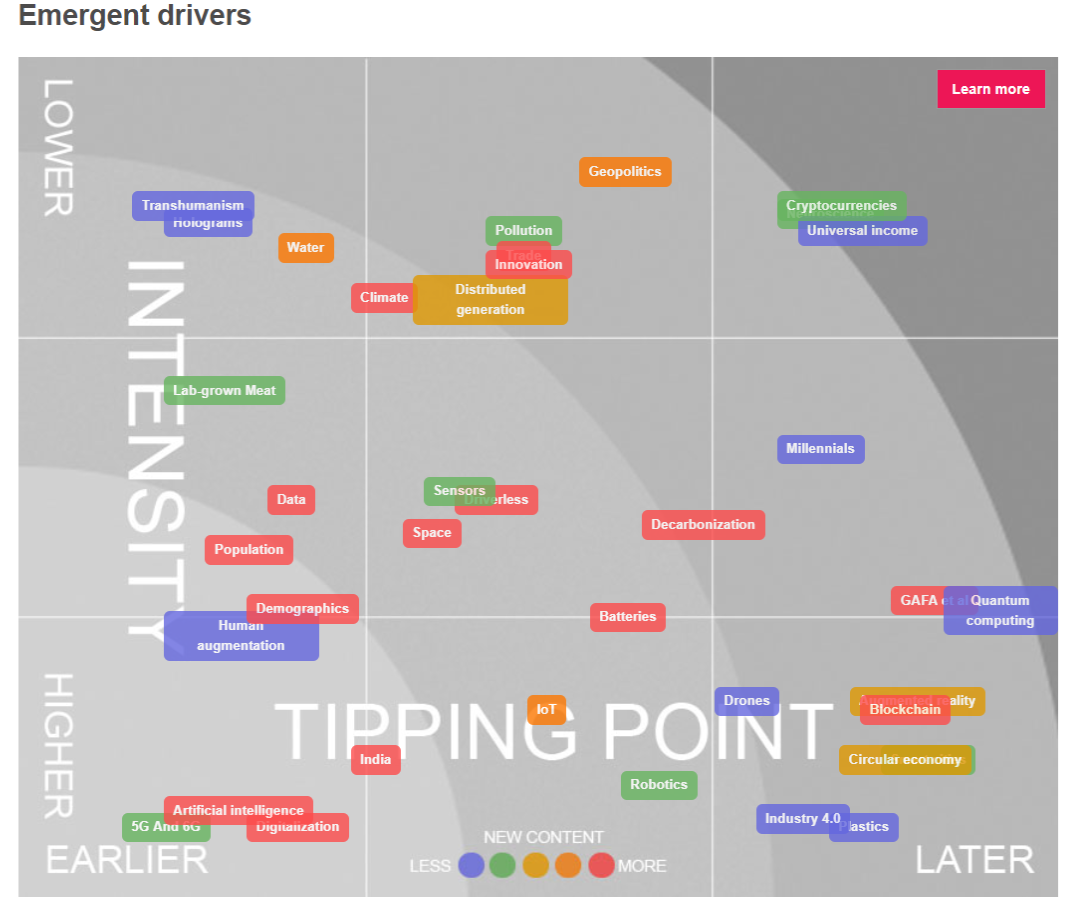 A quick look at emergent drivers this week throws up lots of interesting things! I had a closer look at a topic that I’m very interested in “Universal Income”. I am interested because having ‘meaningful employment’ is one of the most important factors in keeping people healthy. Most everyone needs some feeling that they are contributing and ‘earning their way’ in the world, although I don’t think that this necessarily means a traditional job. This is where Universal Income offerings hold some promise — reliable income providing dignity is NOT tied to meaningful contribution. This is the future.

Our Shaping Tomorrow insights suggest that this idea is still a long way away and that the ‘chatter’ on this topic is not very intense this week — it’s still a weak signal, but keep an eye out for the many trials underway around the world.

Here is what Shaping Tomorrow’s Athena has found about Universal Income for Public Health Dorset.

Ideas like Universal Basic Income and social media memes like Fully Automated Luxury Communism are spreading virally and will increase their reach and impact exponentially as tens of millions are unemployed by automation in the next two decades.

Britain could raise new taxes on Amazon, Facebook and Apple to give every citizen under the age of 55 as much as £10,000 in a form of universal basic income.

Falling incomes will have grave consequences in places like the United States and Europe.

The latest experiment in a universal basic income will be coming to Stockton, California, in the next year.

Elon Musk’s vision of a Universal Basic Income for billions of people could only be realized successfully using blockchain technology.

The State of Hawaii is going to begin evaluating universal basic income.

Even more tantalizing is the idea that with crypto currencies such as system could come into existence that lives outside the confines of nation states and helps bring about a global Universal Basic Income.

Finland has become the first country in Europe to pay its unemployed citizens an unconditional monthly sum in a social experiment that will be watched around the world amid gathering interest in the idea of a universal basic income.

India’s proposal to give every citizen a cash transfer using the digital platform Aadhaar could reduce absolute poverty from 22 per cent to 0.5 per cent.

The groundswell towards Universal Basic Income will make it necessary to give a boost to an economy in uncertain times.

The Universal Basic Income could pay every adult $12,000 per year to raise the floor and make sure that no American falls into poverty.

Things will need to become a lot worse to generate political support for the radical changes to budgets and tax systems a universal basic income requires.

The need for a universal basic income will become more pressing.

Government could give businesses direct subsidies to retain or hire human workers-thereby making a human workforce cheaper than automated systems.

Governments could change the business logic for replacing human workers with automated systems.

There will be growing pressure for implementation of a universal basic income for all citizens as more people are displaced by automation and robotics while the emerging industries require fewer and more highly skilled employees.

The need for universal income could become urgent in a new age dominated by micro-robotics, Artificial Intelligence and ultrasophisticated software.

As jobs will not be the universal means for distributing wealth and well being, a “citizens income” or universal basic income will be needed.

Advocates of UBS acknowledge that there are both personal and specific needs that will require some form of monetary distribution to preserve freedom and agency.

The top future threat might be “disease” and a leading future opportunity is “technology”. Most people won’t quibble too much about the opportunity, but the ‘disease threat’ took me a little by surprise. It is interesting how these are calculated as ‘aggregated’ threats and opportunities and we’ll keep tracking these over the year and report back here.

Let me know what you think about these identified emergent drivers, threats and opportunities.